While the main attraction of No More Heroes are its focal Ranking Battles against eccentric opponents, for about half of the game, players aren’t actually doing that. To enter a Ranking battle requires protagonist Travis Touchdown to cough up an increasingly ludicrous entry fee (which, it’s implied, is often spent on the target’s lavish wishes), and to prepare for those battles – taking trips to the gym, getting the Beam Katana kitted out, buying new novelty shirts – also necessitates money. So, most of No More Heroes is spent doing repetitive, menial and occasionally dangerous part-time jobs until Travis earns the right to the (slightly) more lucrative assassination gigs. Then there’s all the travelling around Santa Destroy to get places to make money, and so on…

Travis dreams of excitement and the glamorous cut-throat world he’s imagined in anime and manga, and for him, every second he spends outside of it sucks. Eventually it even turns out that the entire United Assassin Association is top-to-bottom fake – Sylvia, the organisation’s head, overheard Travis drunkenly mope about his dead parents at a bar one night and set the whole thing up so that he could get revenge on the perpetrator (and to burn a hole into his wallet). There’s no build up to the reveal of the scam, and it’s fairly obvious from the start – the narrative beat deflates itself unceremoniously when Travis decides to phone “the Association” on a whim and Sylvia’s mother answers the phone.

Much like other titles Grasshopper Manufacture has put out, wrestling plays a major role in the aesthetic of No More Heroes. Travis shows a great admiration for masked luchadores (and has a growing collection of their masks over the course of the game) and it’s suggested that he was once training to become a pro wrestler. His actual connection to the sport, however, comes exclusively via the TV screen – the way he learns new moves to use in combat is by watching them be performed on tapes he can buy, simply imitating what he sees. Likewise, this is also where he got his questionable skills with a blade – early on he confides with another character that he never actually met his “master” and only ever “watched [his] teachings on video over and over ’til the fuckin’ tape wore out.”

It’s clear that Travis isn’t an ‘assassin’ in the sense that he trained for and pursued the career, but he certainly is playing what he thinks an assassin is – cool, stylish, highly skilled and motivated solely by the promise of fighting and besting someone greater than he is. He approaches every situation as if he could simply walk away from it at any time. When the Association turns out to be complete bunk, he continues going to the top because all the revelation does is validate him. None of this is ‘real’ to him. Hell, Travis’ weapon, the Beam Katana, is a fairly obvious reference (among many obvious references) to a popular franchise that reassures its viewers in every installment that all of its events already happened “a long, long time ago in a galaxy far, far away”.

But, at the same time as Travis is exploring the fantasy world of maybe-not-real assassins while climbing the ranks of the UAA, he’s also becoming an actual assassin. The mundane side-jobs that he takes on to pay for his entrances slowly give way to opportunities to kill people for money, something that becomes his main source of income. The lines between fiction and reality cross and merge in bizarre ways, leaving the reality of the situation completely muddled. Travis is a ‘fake’ assassin doing real assassin work to pay for a fake assassin ranking system where he kills real people who are also pretending to be, or are actually, assassins themselves.

To this end, No More Heroes shares a ton of DNA with Grasshopper Manufacture’s previous title Killer7. In that game, the world is portrayed as being governed by half-truths and deceptions, politics being “a stage, where people only acted. They were merely actors playing politician” to cover up that everything is controlled at a higher level by “architects”. Characters don masks and conceal their identities, talk in riddles and vague gestures, and nothing is really what it seems. Wrestling masks play a similarly significant role in the aesthetics, from Yoon Hyun and the True Mask to Mask de Smith and the general theme of fictional or adopted identity. In much the same way that Killer7‘s reality is replaced with a half-true fiction, No More Heroes‘ is dominated by personas and stage-names, fiction attempting to override reality.

The glaring exception to the rule is Rank 2, Bad Girl. Whereas the other assassins hide behind dramatic illusion to present themselves as authentic, Bad Girl puts up no pretense that what she’s doing is, as she says, “just a job. The daily grind.” In contrast to the focused, specific archetypes each other assassin’s aesthetic revolves around, Bad Girl is all over the place – a young, foul-mouthed woman in lolita fashion, hiding out in an indoors baseball batting room, spending her time waiting for Travis beating up gimp-suited goons and drinking beer from a busted-up fridge. All it takes is for one person to not play along and the whole facade slips – something Travis himself hates, accusing her somewhat hypocritically of being “just a perverted killing maniac”. 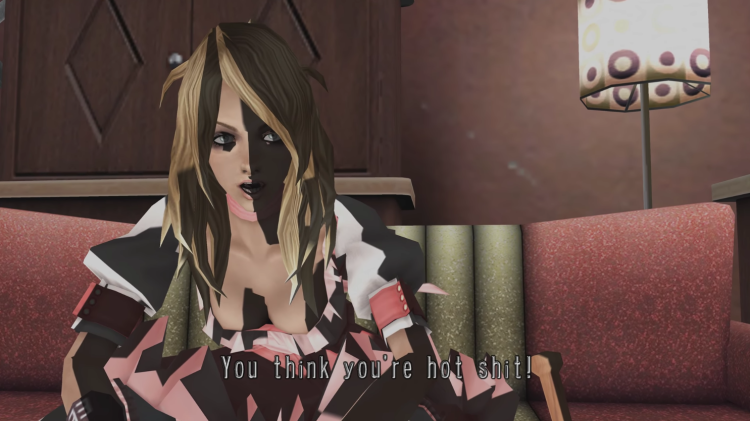 Things only become more bizarre with the final Ranking fight against “Darkstar” (get it?). Travis has to navigate the Forest of Bewilderment guided by the ghost of his sort-of-mentor Thunder Ryu, in order to fight a Darth Vader look-alike who claims to be his father (and who, for some reason, Travis plays along with). Then, his half-sister Jeane (who we, the audience, have never even heard of until now, except for the baffling fact that she shares her name with Travis’ cat) kills off Darkstar and demands a fight in his place, stating that she had become a teenage assassin to get revenge on their father for a lifetime of sexual abuse (as well as for driving her mother to suicide) – again, information that the audience had no idea about until this exact moment.

It’s this twist in particular that has led many people to see No More Heroes as a game about pointlessness or futility: since Jeane’s arrival erases all of the game’s setup in favor of a bizarre left-field twist, it’s easy to interpret this turn as an agreement with Travis that you shouldn’t look for too much meaning in violence. However, I feel like this reading glosses over a critically important aspect of the narrative to reach its conclusion – Travis himself is wilfully ignoring all consequences of reality (and encouraged by the UAA to do so, no less) to pursue this absurd movie-fueled dream of power and glory. His declaration that everything is “meaningless” is a convenient excuse for him to avoid having to actually confront how stupid every decision he makes is.

The very first Ranked assassin of the game, Death Metal, tells Travis that “the wall [to paradise] is high, higher than you will ever know”. Heeding basically no warning, Travis spends the entire fight dreaming of the luxury he might live in and talking about “finding the exit to paradise” while trying to shake off “the feeling of doom running down [his] spine” (ie. the thought that what he’s getting into is extremely fucking stupid). Travis knows that what he’s doing won’t bring him to paradise, he’s just ignoring that knowledge in favor of nonsensical idealism. This forced self-delusion even gets reflected in the inter-mission gameplay – where Killer7 pushed the Smiths along strictly pre-determined routes, Travis has full control within the open world of Santa Destroy, but finds himself constantly retreading the same few paths to the same few locations over and over again.

It’s important that Travis should earn all his baseless confidence from wrestlers and movies, because media as a whole is practically designed to train us to think in particular ways. Artistole’s foundational work in the Poetics laid out a form of drama which, as Augusto Boal puts it in Theatre of the Oppressed, “formulated a very powerful purgative system, the objective of which is to eliminate all that is not commonly accepted, including the revolution, before it takes place.” In more relevant terms; dramatic media uses its position to dictate what we see as “good” and “bad” in the real world itself by shaping its heroes and villains in a certain way, ecouraging us to idolise and aspire to these fictional apexes of good virtue.

A character – almost always the villain in contemporary media – possesses some fatal flaw that leads them to aggressive, violent or generally antisocial acts, and a hero comes to “purge” them of that flaw, re-establishing law and order. In the much more contemporary age of anti-heroes like Batman and Dirty Harry, media starts to carry the blatant messaging that what society assigns as ‘good’ can also perform the same violent acts of evil, but are justified in their actions solely by siding with the establishment.

Normally Travis would be the character who arrives to re-establish order, and he certainly tries to act the part by repeating the Cool Guy stuff that he’s seen on screen, except there’s almost nothing separating him from his opponents ideologically or morally. The many “antagonists” of the story all share the exact same ‘flaw’ – a desire to enact violence on others – and in a conventional story Travis would ultimately learn to shed this flaw from himself, except he refuses to learn or grow and it sticks – there is no catharsis. The finale, in which the narrative suddenly and dramatically shifts is a near-supernatural effort to correct course, to finally punish Travis for his tendencies, and Jeane delivers him a seemingly fatal blow – only for Shinobu to intervene and allow Travis to continue to live, victorious.

By the time the game’s wrapped up, none of Travis’ ambitions even came close to true; he’s still living in his dingy motel, on his own, broke and alone with no resolution to his adventure and a whole new trail of dead bodies following him around. The game even cheekily notes that Travis is meant to die here by sending a nameless assassin to off him on the toilet right as credits roll, only to then offer up The Real Ending in which not only does Travis live, the game then introduces tons of unnecessary information just to kill any sense of closure or satisfaction in his narrative. In the last few lines of the game Travis is reminded that, as the protagonist, it’s his job to tie up the loose ends and provide the narrative’s catharsis, to which he replies “then let’s find that exit they call ‘paradise'”.

I know. Too bad I won’t write about the sequel.