The moment I was dreading months ago seems to have finally cropped up, and the release of a new action-focused From Software title has the words “easy mode” lingering back over the studio’s heads again. The company has mostly opted for a one-size-fits-all approach to difficulty that had its biggest challenges mitigated by the inclusion of online co-op functions, but the exclusively single player Sekiro: Shadows Die Twice sticks to its guns and allows for far fewer ways to circumvent difficult sections. These games have been characterised heavily over the years with the phrase “banging your head against the wall”, wherein the challenge is itself an obstacle that has to be brute-forced through, and for some who would rather see the environments and experience the story (something also more prominent than before) an easy mode is increasingly a thing people want to argue for. Although, really this article isn’t about this argument itself – go nuts, have an easy mode – but more the way in which this gets argued for: practically every single time, the inevitable talking point comes up of “well, what about disabled gamers?”

This isn’t to say that an easier difficulty wouldn’t help certain members of the population finish the game, but rather that the ways in which easy mode is argued for as a one-size-fits-all fix for the specific accessibility problems that crop up in these games is a bit like solving a Rubik’s cube by putting a blanket over it. If such a mode was implemented, what it would most likely entail would be a reduction in damage taken, less aggressive enemies with smaller health pools, and more effective healing items – if a person’s ability to perform in these games was limited by their reaction times, this would probably be a decent solution, because the penalty for failure is lowered. However, what it doesn’t fix is a myriad of other problems inherent to many games, not just this one, and it can also create new problems for accessibility and inclusivity in the process.

The clearest example of this that I can think of in Sekiro is what I generally call “parry feathering”. By pressing the block button in time with when they’re about to be hit by an attack, the player can deflect that attack, negating any damage and dealing posture damage in return. However, the game has no penalty for just spamming the block button, only mistiming a deflection, so an incredibly effective strategy is to simply do this whenever an attack is about to hit you to fairly easily deflect every attack with little consequence. When initially learning timings for certain enemies, especially ones with wonky or floaty movements like the spooky kappa-esque Headless, it’s an effective way to see attacks and when exactly they clash until you have enough confidence to reliably deflect it. It’s also a technique that crops up often in the glut of tip videos people have put out on getting better at the game, but from casual observation it seems like something that many discover by themselves regardless.

Adding an easy mode doesn’t really change anything about how the game handles its controls or its mechanics, and does absolutely nothing to discourage the player from mashing buttons like this for optimal results. What an easy mode does do is offer a lower-stress environment for people to experience the game while still being able to explore the various specifics of the mechanical interaction. When a game has an easy mode, it’s usually something you consciously choose to use because some part of the challenge doesn’t appeal to you, and inversely with hard mode, because the core experience of the game itself is unchanged. It doesn’t change anything fundamental about the game’s inherent accessibility – to put it simply: it’s not an accessibility function, it’s an approachability function. 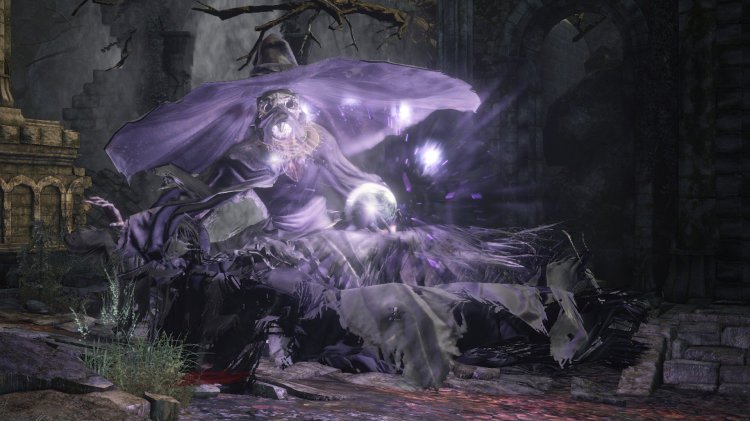 This boss isn’t even ‘hard’, it’s just annoying to have your time wasted by a phase in the fight that expects you to have functioning eyeballs.

In FromSoft’s previous title Dark Souls 3, there’s a boss called the Crystal Sage that will create illusions of itself that all attack you, and discerning which is the original during these sequences is a core part of beating the fight. As someone with colorblindness, I didn’t find out that this boss had a visual tell to distinguish between original and illusion until someone straight up told me that it existed, because the tell is that one uses blue attacks and the other uses purple. Obviously it would be excessive to play these games on easy (especially as someone who loves playing difficult games) just because one boss has terribly considered visual design. So why do motor and fatigue related disabilities get treated like this? It seems that rather than wanting to confront the idea that popular game design inherently excludes certain kinds of players because they demand a certain level of intensive play and then refuse to allow any sort of aids for it, people would rather cover it up by instead implying that this all somehow ties into difficulty, and relegating these players to a different mode.

People in general seem incredibly reluctant to actually change the fundamentals of design in order to make their games more approachable. When I went looking for colorblindness solutions for Counterstrike: Global Offensive, a game I can barely play because the color design makes it impossible to see enemies, the consensus that I was told was that allowing an option to make my life easier playing the game would let other, more able bodied people “cheat” by having better visibility (if that’s the case they’re already cheating against me because I literally cannot see them half the time!). I got a similar response with Overwatch, a game that everyone lauded for having any color palette at all but never bothered to analyse if that color palette was at all readable; I was told the game already had colorblindness options in the form of a full-screen tint that…tints the entire screen and is therefore useless to me. I can’t play DotA 2 because the increasing excessiveness of the cosmetics makes it more and more difficult for me to process what exactly is going on in the game due to visual sensory problems relating to autism, and Valve aren’t going to add a toggle-off to their cash cow any time soon. Several areas of The Witness are either far more difficult or straight up impossible for me because I can’t properly see the puzzle I’m supposed to be solving. Do you know what the lead director, Jonathan Blow, told people with disabilities that gave them difficulties with certain parts? “Just skip that area”. Thanks dude.

When it comes to accessibility discussions it always seems like able bodied people come first over anyone else. This is why instead of advocating for any options to minimise the need to button mash like a built-in turbo function, or anything that would make it easier for players to react to attacks when they have a cognitive disability (just spitballing here, what if they gave enemies a very noticeable visual highlight to indicate they were about to start performing an attack?) we get this never-ending debate about whether or not an easy mode would impact the ability for perfectly able-bodied players to enjoy the game. The easy mode discussion is so frustrating because it’s so reductive of the actual problem with video games and how they fail to incorporate different levels of ability, framing it instead as “well, we already have a solution to this problem” instead of actually interrogating what the problem is. This isn’t stuff that should be solved in a separate mode, it should be part of the entire game experience.

When Ninja Gaiden released an updated version of the game in 2005 it included an easy mode that unlocked if you died too many times in the first level. Unlocking it also involves agreeing to “abandoning the way of the ninja”, having companion Ayane take the piss out of you, and being given cutesy accessories to wear.

This isn’t to say anything about the most frustrating part of all this, which is that people’s solution to “people can’t play this game because of overdemanding gameplay” is to relegate all the people who like these games enough to buy them but struggle due to poor game design to a different game mode that, by name, is implied to be inferior. Naming a game mode “normal” and then making “easy” the supposedly accessible option is an incredibly short-sighted, fairly offensive and incredibly condescending play into the idea that people with disabilities are generally considered “less capable” than the able-bodied. Obviously there’s the whole history of hypermasculinity at play with difficulty options and especially their naming conventions (looking at you Wolfenstein: The New Order) but for people to so casually slip into this kind of normative language when discussing accessibility is incredibly disheartening.

Every time this discussion ramps back up I’m reminded of how little games as an industry seem to care about my own capabilities. After all, it wasn’t that long ago that Activision and Toys For Bob opted to ignore including subtitles for their Spyro: Reignited Trilogy purely because they couldn’t be bothered. At the same time the discussion around accessibility can often feel completely circular or like it’s completely ignoring the actual wishes of disabled people, instead using them as props to support arguments for or against the inclusion of accessibility options in games. Poor Halfcoordinated, probably one of the most famously skilled disabled players, seems to spend half his time on Twitter asking people to stop doing exactly this.

Sekiro can have an easy mode, but stop pretending that this is a fix for the industry’s accessibility problems.