I wrote this in October of 2018. Today, on August 28th, 2019, it has come to my attention that Alexis Kennedy, the game’s co-creator, is an abuser. You’ll eventually hear this about some piece of media that you loved, because the society we live in enables and encourages abuse of power, by auteur figures and lawmakers alike. I am making this note today merely as a small token of support towards and solidarity with his victims. I know that by writing this I have contributed, unknowingly but unmistakably, to a climate where he and people like him are praised and rewarded and their victims silenced, and for that I am sorry.

In my misspent youth, I once wrote an essay, for some course or another, about E. A. Poe’s short story The Fall of the House of Usher. Reader, I will not lie: it sucked. It sucked to write and it sucked to read, primarily because I felt that I was not doing justice to what was, at the time, my favourite short story in the world. My argument was competent but bland, my secondary sources worse than useless, and my conclusion amounted to surrender. Usher, I wrote, refuses to resolve itself into a stable and coherent interpretation; the story suggests that it might be about vampires, or sentient fungi, or depression, or abuse, or the unspeakable crimes of prestigious noble families, but does not settle on any of these things, and then just ends abruptly. It’s not that you can’t squeeze any meaning from it, but rather that it suggests an excess of meanings, none of them any better than the next.

I still believe all of that to be true, but at the time, it didn’t seem good enough. I came at Usher determined to solve it, and what I ended up on instead felt like a by-the-numbers post-structuralist platitude about the intractability of language.

The reason for my dissatisfaction was something I hadn’t really put into words yet at the time, but had begun to sense: that this kind of conclusion was not the one you were supposed to arrive at. The papers that got you praise and top marks were the ones where you took a slice of culture and made it your own, declaring as arrogantly as formal style allows that it means this thing, and only this thing, and that there are no other things it might mean. To fail to do so, or worse, to refuse, was to succumb to mediocrity.

It’s not that I think I was wrong about Usher. It’s that I felt like instead of being boringly right, I was supposed to find a way to be boldly, interestingly wrong, and that trying to respect the text for what it was amounted to showing weakness.

Now, what does any of that have to do with videogames, you might ask? Well, have you heard about Cultist Simulator?

The clue’s in the name: it’s a sort-of solitaire boardgame about running a cult, discovering forbidden lore, evading the authorities and summoning eldritch abominations. I love it a lot, and that whole preamble was necessary to begin to explain why.

You start the game with several cards representing your modest physical and mental faculties, a job, the Work verb, where you can slot those cards to get money and possibly some other things, and a relentless ticker that takes some money away every 60 seconds. Going through the initial paces, you unlock some more verbs – Talk, Explore, Research, Dream – and begin to encounter cards representing other characters, objects, scraps of knowledge or states of mind. At some point the time ticker will also periodically start spawning threats that may end your run if you accumulate too much notoriety or lose yourself in extreme states of the mind. Learning to juggle your cards to cancel out these threats is the first phase of figuring out the game, and will take a few tries. The second phase is finding out what you actually need to do to “win,” which is considerably more convoluted.

Cultist Simulator lives and dies by its writing, credited to Alexis Kennedy of Fallen London and Sunless Sea fame. Every card, every property of a card, and every viable interaction of cards and verbs comes with a snippet of prose that both evokes a mood and suggests connections between the mechanics and the game world’s mythology. Some things are spelled out for your convenience – put two Erudition cards into Research to upgrade your Reason – but for the vast majority, you’re on your own. The process of discovery that makes the player gradually build an interpretive framework for the game’s opaque concepts and systems is a wonderful thematic concordance: just as the character you’re playing dives headfirst into dream-visions and secret histories, so do you, the player, desperately attempt to put things together.

Integral to this process is Cultist Simulator’s system of mythology. Most cards, and in particular the “lore fragments” you accumulate, are associated with one of nine aspects or principles: for instance, Winter stands for cold, death, endings, silence, stillness, certainty. Winter aspect can be found on corpses, in the feeling of dread, and in experimental silent film. There are also quasi-demonic, quasi-divine entities of Winter, such as the deadly Maid-in-the-Mirror and the presence known as the Sun-in-Rags. All of those are hinted at or mentioned more than they are described, often in connection with other otherworldly beings and some forgotten but portentous history they share. The sparsity and ambiguity of this system of signs, combined with the richness of its suggested meanings, is the exact phenomenon I ran up against all those years ago when trying to make sense of Usher. Everything means too many things at once, and answers are really just elaborations on the initial question.

It’s always been my understanding that chasing this impulse of making sense of a profusion of meanings is what gets people into tarot, which is, again, a very appropriate association for a game about both cards and the occult. 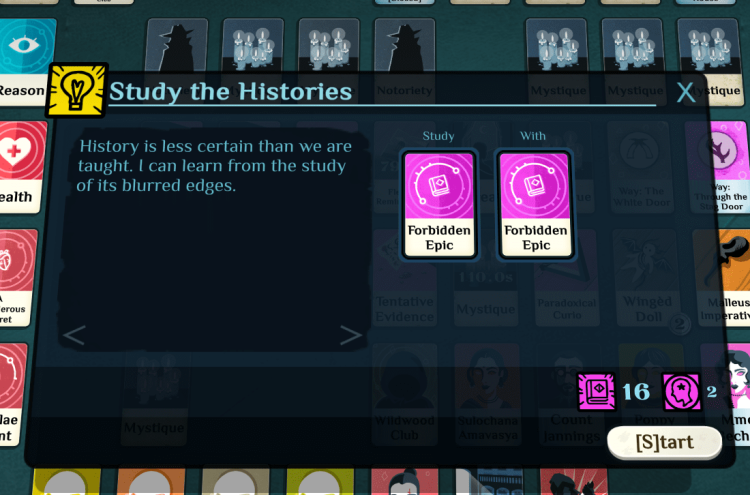 Because game criticism is a young discipline that continually reinforces its own worst habits, the most popular approach to ambiguous or understated narratives is to try to solve them like a puzzle, figure out the chronology, the major players, the causes and effects. This is what’s usually meant by people purporting to “analyze” the “lore” of games: finding the solution that collapses the entire field of thematic possibility to a Tolkienesque chronicle of events starting at the creation of the world, which is then declared to be the objective and correct reading based on how many YouTube views it happens to have. Cultist Simulator, being a game quite aware of its cultural lineage – I would be truly shocked to learn that Alexis Kennedy has not read The Fall of the House of Usher – is a snare thrown underneath the feet of readers who work in this mode, and an argument against its usefulness.

When you “solve” Cultist Simulator, collapse it into one possible story out of all the stories it has the potential to be, you’re done enjoying it. You’re just tediously going through the motions of putting the right card in the right slot, getting the right result, and putting that in a different slot until you get your achievement. At the time I’m writing this, incidentally, one of the hidden achievements still has not been obtained by any player, and as far as I know, is not obtainable at all. Why else would you put that in the release version of the game, if not as a deliberate point about the impossibility of finding the perfect 100% solution to this textual mystery?

The victories that are actually in the game hardly feel like victories, either. Some are quickly and trivially attainable: settle down at your desk job, marry your wealthy admirer. “This could be considered a victory,” taunts the endgame screen, and both the game and you know it’s not; you’ll dive right back in, study the cryptic tomes more closely, try a different approach. By the time you’re able to attain something more, you will have devoted many hours to understanding the arcane interactions of mythological principles, maybe sacrificed some of your followers’ lives in the pursuit, maybe destroyed many investigators and rivals, on one of several paths whose goal, while murky and incomprehensible, necessarily entails leaving whatever you understand as your “humanity” behind. Did you win? Possibly. You attained your ambition. You attained something, at any rate, and no one who hasn’t walked this path has any frame of reference by which to judge it.

I think it’s desperately important, in order to become a sensitive and critical reader of culture, to learn to suspend the detective’s impulse to find the true culprit, the correct interpretation, in cases where it’s simply not productive to do so. It’s hard to blame anyone for thinking along those lines, since that’s what most of us get out of our education: there’s an answer that’s expected, and if you memorize it, you win. But this approach leaves us terribly unprepared to deal with conflicting accounts, suppressed or underrepresented voices, and answers that are neither expected nor convenient.

Imagine this scenario: using a model viewer, someone finds a tiny, two-pixel wide emblem on some Dark Souls armour model that seemingly identifies its original owner as belonging to a different noble house than was previously thought. What do you think is the most urgent consequence? Determining, beyond a shadow of a doubt, which house it really was, so that the chronicle is neat and without contradictions? Or the significance of the contradiction itself – the unreliability of the authoritative historical record, the way in which victors write history, the tremendous weight and volume of time relative to our ability to record and make sense of it? One of these, I’d say, is in much better accord with the overall themes of the game we’re talking about.

Please understand that I’m not arguing that Cultist Simulator, or any other text, means whatever you want it to mean. There are very clear thematic lines running through it: obsession and desire, the unknown as a source of fear and fascination, the dull tedium of everyday society contrasted with the tantalizing and forbidden possiblities living just under the world’s skin. (The latter two, I would argue, make it a text that’s at least in conversation with queerness, if not wholly aligned with it.) Within those bounds, however, there is a great deal going on, and no word may be presumed innocent.