The UK has a somewhat troubled relation with horror titles. During the early 80s, the media frenzy drummed up by conservative news outlets like the Daily Mail and the Express over the (entirely fictional) video nasty crisis that was allegedly “corrupting children” led to a hastily scrawled up bill by the Conservative party – the Video Recordings Act of 1984. This act, which forced theatrical home video releases to pass through the BBFC first at a hefty screening cost, quickly led to the UK having some of the strictest censorship laws in the entire world – this was especially true under BBFC director James Ferman, who most infamously would heavily censor anything that had illegal weapons in it, including, hilariously, the mention of ninjas (remember “Teenage Mutant Hero Turtles”?). Under the Act, several high-profile films were impossible to buy on video in the UK until 1999, such as The Texas Chainsaw Massacre (and its sequel), Straw Dogs and The Exorcist, alongside a large library of lesser-known or low-budget ones that couldn’t afford the cost of screening for the BBFC. While censorship has relaxed somewhat in years since, papers like the Daily Mail still regularly bring the moral panic back when it suits them.

It’s under this context that the UK found itself in an unusual position with the release of 2006’s Rule of Rose. In Italy, Poland and France, a small group of politicians had called for the game’s banning, citing many exaggerated or simply made-up claims reminiscent of the video nasty debate, all of which were quickly dismissed by the Video Standards Council. The game was published across Europe under a PEGI 16 certificate – but skipped out on a UK release, despite sending review copies to UK magazines. Ironically set in the United Kingdom, but due to a cast of underage characters, dark themes, and some implied sexual undertones, the strict censor laws in the UK may have played a role in scaring the publishers away. With Australia also not seeing the game under likely similar circumstances, the only English-speaking territory to receive the game was North America. The game’s controversy quickly dissipated after release, but due to a lukewarm reception, paired with its troubled release, limited print and surrounding controversy, it quickly faded into obscurity. The game is now pretty difficult to obtain – a copy could set you back a minimum of £100.

This is a particularly in-depth story of one game’s unusual release, but the fact is that there are a lot of games like Rule of Rose that, because of their lack of success, or other circumstances, are much more difficult to obtain now. While there are officially sanctioned re-releases of many titles on official platforms, these are often selectively curated to appeal either to die-hard fans, massively popular franchises or even just successful initial releases. These games are also usually ones owned by companies that are still existing and actively producing titles – this is likely why the Xbox One currently supports backwards compatibility for iconically terrible shooter Dead To Rights but not any of the popular Project Gotham Racing games, as the source code for the latter is probably currently stored in some undisclosed warehouse in Liverpool. The video game industry’s long history of being terrible at self-preservation means that porting is unusually difficult compared to other industries, and the lack of any universal standards, continued platform competition and the overprotective nature of almost every company means that porting smaller titles is increasingly difficult to accomplish. 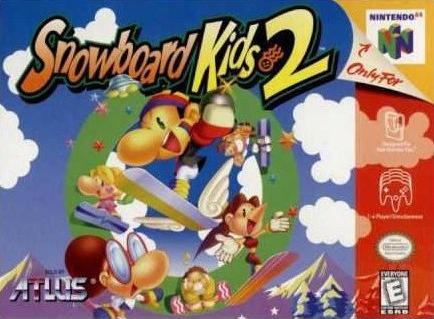 In the reverse of Rule of Rose, the PAL version of Snowboard Kids 2 was only released in Australia, so in the UK it’s an incredibly rare video game for a completely different reason.

In contrast the internet has, sometimes inadvertently, performed a preservation service for the rest of us. With huge websites devoted to hosting ROM files of games on many platforms, like the Commodore-focused site C64.com (alongside other, less legal ones), it’s not that hard to gain access to a copy of a game that is literally impossible to obtain otherwise. Piracy as a practice is almost universally frowned upon, but video games have taken over-possessive protective measures to extremes – Nintendo in particular have had a very long history of completely backwards design philosophies out of fear of piracy, and their insistence on using space-limiting cartridges stemmed from a misconception of CDs as easier to copy. Things such as day-one patching, always-online DRM, or region-locking hardly prevent people from illegally playing games, but they do set a massive barrier in the way of game preservation – how will anyone play IO’s 2016 Hitman once the servers go down? What happens to all the Wii shop exclusive titles once the service is gone forever? How do people play the Konami casualty P.T.?

Despite the fact that game piracy is so frowned upon, it has regularly come in useful for companies when it suits them. In a 2016 GDC talk, Frank Cifaldi compared the hex code of a downloaded ROM of Super Mario World with the official version available on Nintendo’s Virtual Console and found that both had an identical iNES header, a system devised by amateurs for storing images of NES games for unofficial emulation purposes – meaning that Nintendo might have just downloaded a free ROM off the internet instead of using their own source code. Preservation via ROM sites is so thorough and so accessible that Nintendo – a company that claims emulators pose “a significant threat to the industry” for some reason – will use the same sites they regularly demonise to turn a profit with their own games.

Playing older games “legitimately” (aka, in a way lawyers like) only gets harder over time. The PS4 currently doesn’t support backwards compatibility, and the PS3 only supported it briefly, meaning that the majority of users of both consoles are reliant on older games being ported in order to play them. In addition, buying older, second hand consoles will eventually become an impossible practice, as consoles decline in functionality over time and less working ones are circulated in markets, leaving enthusiasts to rely on the efforts of emulator authors in order to look into the history of games. As the number of copies of both games and consoles in circulation dwindle, eventually it’s the efforts that ROM sites go through that become the rescuers of the forgotten side of video game history.

The UK during the post- video nasty era found itself in a similar circumstance, with a group of titles being completely unavailable or banned in the country for an extended amount of time in the 80s (and many through the 90s). What emerged was an underground bootleg market, where people with access would sell or rent VHS copies of some of the banned films to enthusiasts. Many of these bootlegs were then copied again and again, leading to many films being in limited quantity but available as a heavily reused VHS passed on to them. The majority of the films weren’t actually good at all, some downright abhorrent, but their association with the outcry was more than enough to pique many people’s interests, elevating some forgotten films like Driller Killer to a much more prominent status, and it’s this underground market in the 80s that created an entire scene of filmmakers and enthusiasts.

In 2018 we hardly have the same kind of aggressive censor-mandated restriction on what we can see, instead being dictated by companies who want you to believe they only ever made good, successful things. Nevertheless, that underground circulation of illegal copies still exists. Much like in the 1980s, it’s civil disobedience that eventually preserves and rescues media from being lost when the industries stop doing it themselves. There’s an entire library of video games online available to just about anyone, spanning a considerable history of the entire industry, and to say it exists solely to skirt the cost of paying for them can be an unfair assessment. Sometimes there’s literally no other choice, as is the case with titles like Rule of Rose, and until the industry gets its act together to preserve its own history, its the people they hate the most that are doing the most work to save it.